JACKETS AS ARCHITECTURE – THE CONNECTION BETWEEN THE TWO FIELDS Before I decided to go into fashion design and apply to Otis College of Art and Design, I was seriously considering going into architecture for a while, but at the end fashion won over. I have always had an interest in architecture and I truly believe there is a connection between creative people who are drawn to both fields. There are a lot of parallels between the two, from designing shapes and working with proportions that need to work together to the outside aesthetic of materials that need to be pleasing to the eye, I feel the two fields are related in many ways. That is why when I came across this article about USC 5th year architecture students working on this project called “Truth in Making, an Architectural Inquiry”, I felt like I had to share it with you all. I will not explain any more since I am including the whole article and the video for you to see here. I hope you enjoy it and let me know your thoughts on the connection between the two fields.

Its Not Fashion – It’s Architecture – by Allison Engel

The USC School of Architecture students learn the fine points of manufacturing, construction, and problem-solving as they craft wearable creations with unusual materials. Look at this project the A jacket made from thumbtacks and caulk. Another created entirely from industrial zippers. Look at this spiky fabric composed of kitchen matches. How about a bumpy fabric of 12,244 pencil erasers, sewn one by one in a colorful chevron pattern? These were a few of the solutions that fifth-year USC School of Architecture students devised while creating unique Mao jackets in a studio called “Truth in Making, An Architectural Inquiry.” Fourteen jackets were displayed in an exhibition March 7, and the project attracted off-campus attention, including that of Frances Anderton, host of KCRW’s Design & Architecture program and blog. The assignment from Associate Professor Lee Olvera was clear and brief: Select two materials maximum. Experiment with joinery, creating a skin or “fabric,” testing all potential material properties. After two weeks of speculating about how the materials will perform, select your materials. Once committed, you may not switch. Print out the studio-selected pattern for a Mao jacket, chosen for its conformity and lack of detail. Construct a wearable jacket. You have five weeks, start to finish. “They must think with their hands,” said Olvera, who has given the assignment annually since 2012. “There’s no hiding behind a drawing or a diagram or just waving your arms and saying ‘it’s going to be beautiful.’ If it won’t work, it won’t work. “It’s not Project Runway,” he said. “It’s an exploration of program and function. In architecture, we’re called upon to design the skins of buildings all the time. This project infuses our intuitive skills of artistry and aesthetics with the rigor of analytical and performance-based material experimentation to create innovative working solutions.” Class materials from the hardware store? Past students responded with unlikely materials (orange ear plugs, crayons melted into new shapes, woven rubber bands), and this year’s students continued that tradition, using copper grounding wire, acrylic paint and – appropriately enough – 5,500 round metal pins with Chairman Mao’s face printed on them. (Student Yimeng Wang ordered them from China.) Several came up with time-consuming recipes for turning their raw materials into fabrics. Corey Koczarski started with Rockite, a substance used for patching cracks in concrete. He cast Rockite in silicon molds, experimenting with thicknesses and profile to come up a shape that could be reproduced 4,948 times and linked together. Lillian Lin had no fewer than six steps for turning artist’s gel into the skin of her jacket. She colored the clear gel with fabric paint, spread it on a sheet, scored lines on the surface, dried it, wove the gel into strips, then ironed them flat before shaping her front, back and sleeve pieces. The hours the undergraduates spent in their Watt Hall studio stretched late into the night, early mornings and weekends. Snags developed. Nick Tedesco discovered that it took about 10 hours to hand-sew a square foot of his colored pencil erasers. “Getting the sleeves on was a nightmare,” he said. “You are mentally fatigued working for hours and hours. The erasers rip and tear. “If something looks good on paper and make sense, you can’t be sure it will always work. But you problem-solve. I think a lot of architecture is like that.” Yoonji “Angie” Nam’s unexpected outcome was that the acrylic paint she arranged in circle patterns on Teflon baking sheets took weeks and weeks to dry. When the jackets were displayed March 7, hers appeared as a vest. “I have sleeves but they are not dry,” she explained, brushing white paint from her hair and face. “I think to dry the inside will take one month.” Some surprises were happy ones. Tamar Partamian, who laboriously wove the strands from seven cassette tapes, found that the resulting fabric was much silkier and shinier than expected. “When you see a small individual unit, it’s different from seeing the whole,” she said. Sean Miller, whose thumbtack jacket fell apart days before the exhibition (the caulk wouldn’t hold the smooth metal surface), called the process a struggle. “I think I did learn more being this risky, this extreme and having it fail,” Miller said. “I really pushed myself and learned more than if I picked a safer choice and was more successful. You also have the more difficult and more valuable conversations about your work.” At the exhibition, the designers happily spent hours explaining their projects to onlookers. Several tried on their jackets, proving they could be worn. Calvin Lee, whose lightweight garment of crocheted electronics wire had the most tailoring details (four working pockets with flaps, a pointed collar and buttons), said he was considering wearing his jacket to graduation. 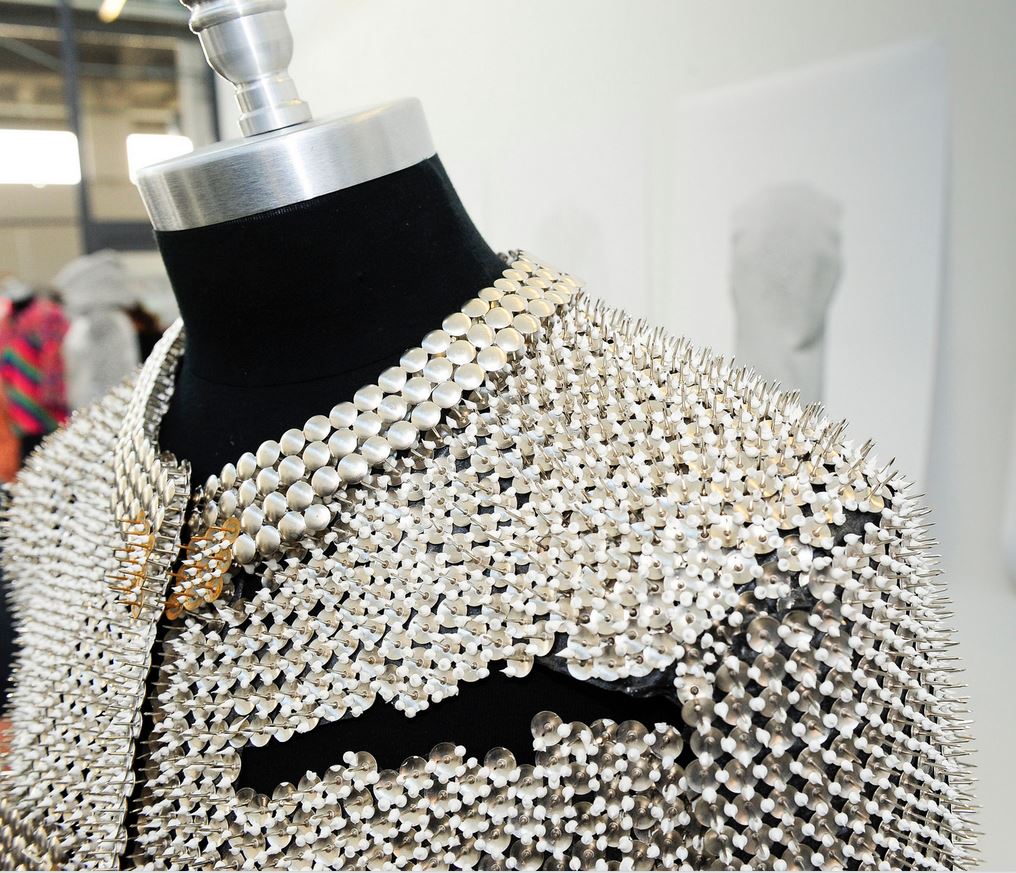 This Jacket Has Been Made With Thumb Tacks & Push Pins 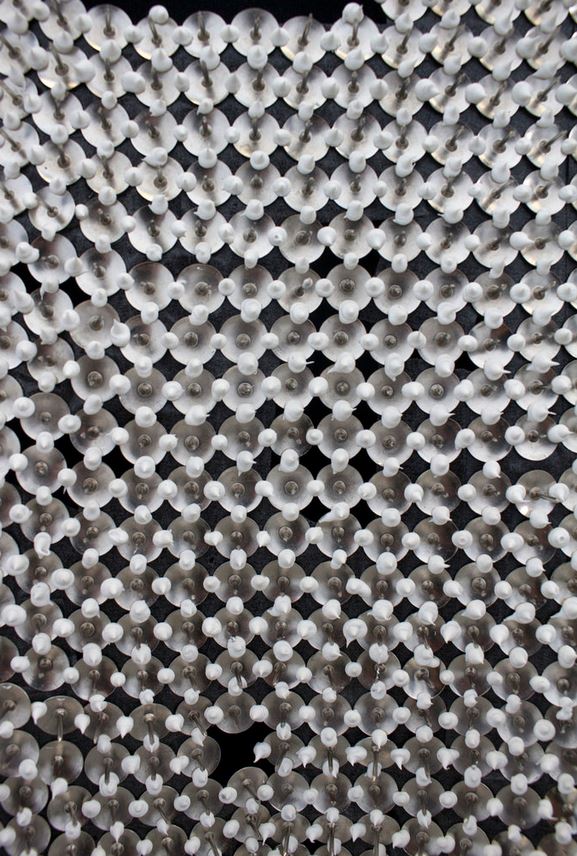 The Thumb Tacks & Push Pins Are Joined Together With Silicone – That Keeps The Jacket Flexible!
I Guess You Can Say This Is A Really “Sharp” Jacket 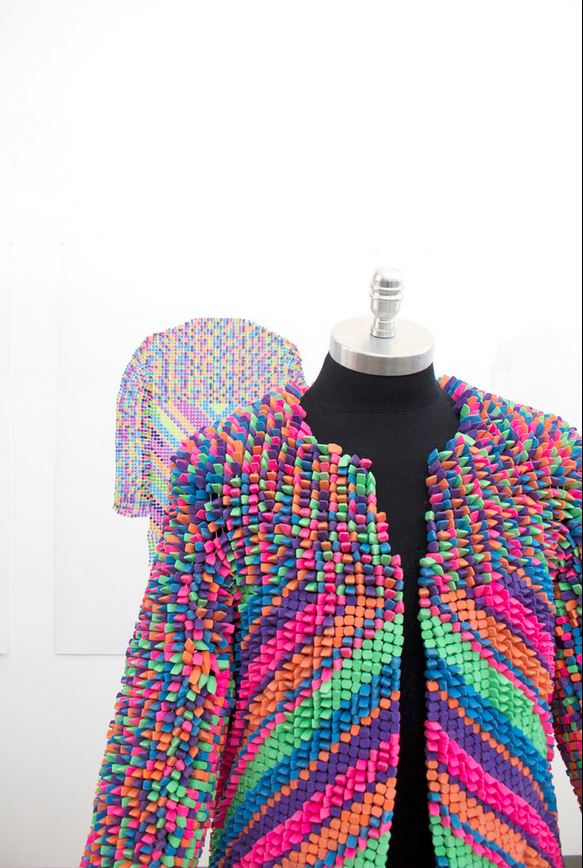 Jacket Made From Erasers – Very Colorful 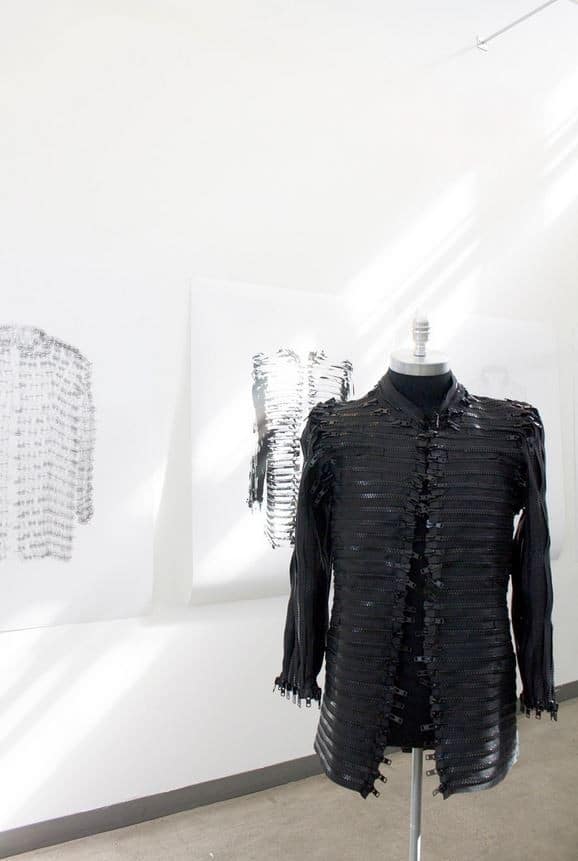 Jacket Made From Zippers 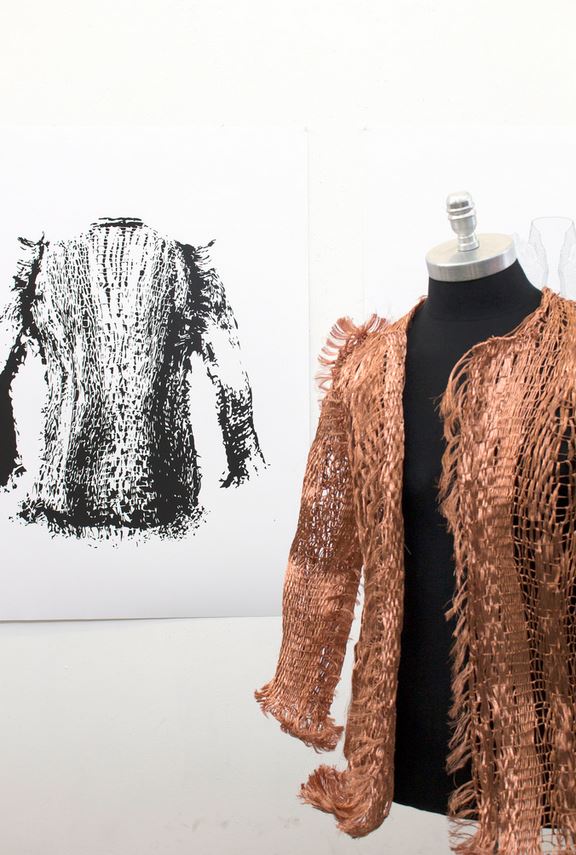 Jacket Made From Copper Wire 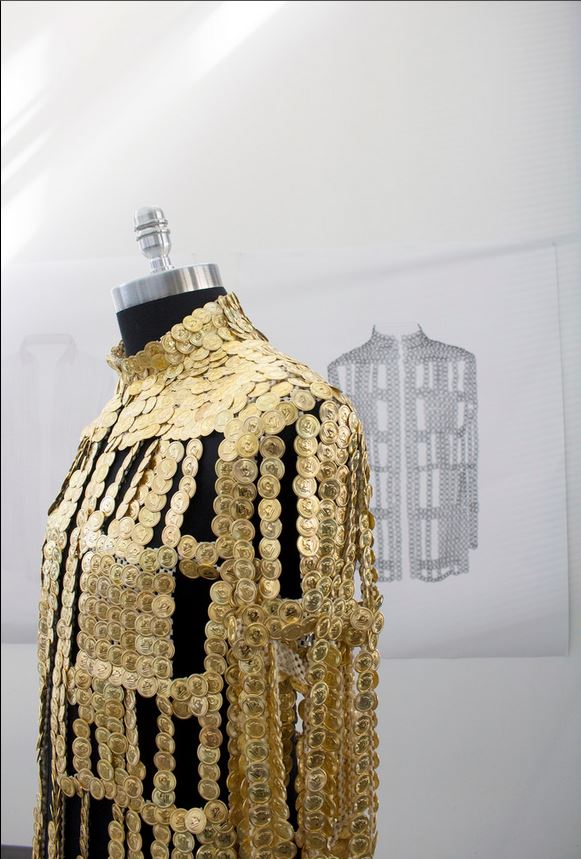 Jacket Made From Mao Pins 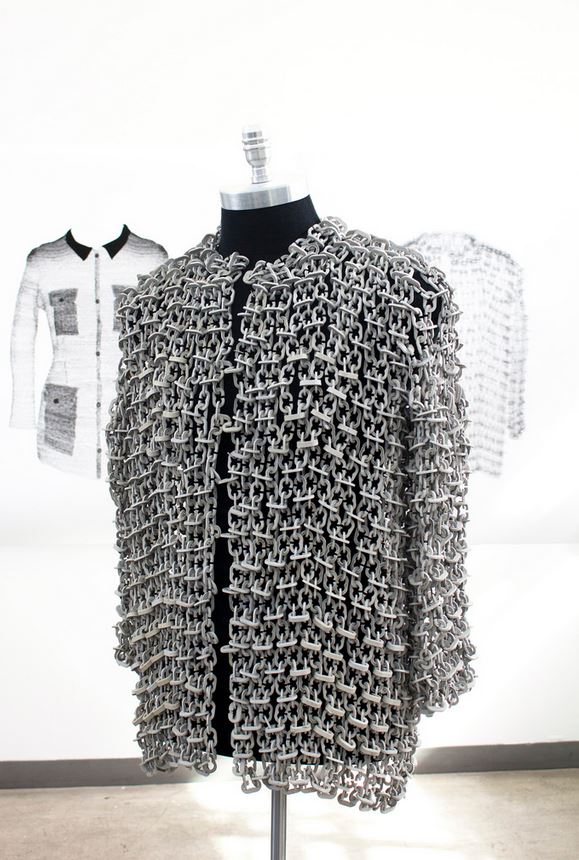 Jacket Made From Cast Rockite 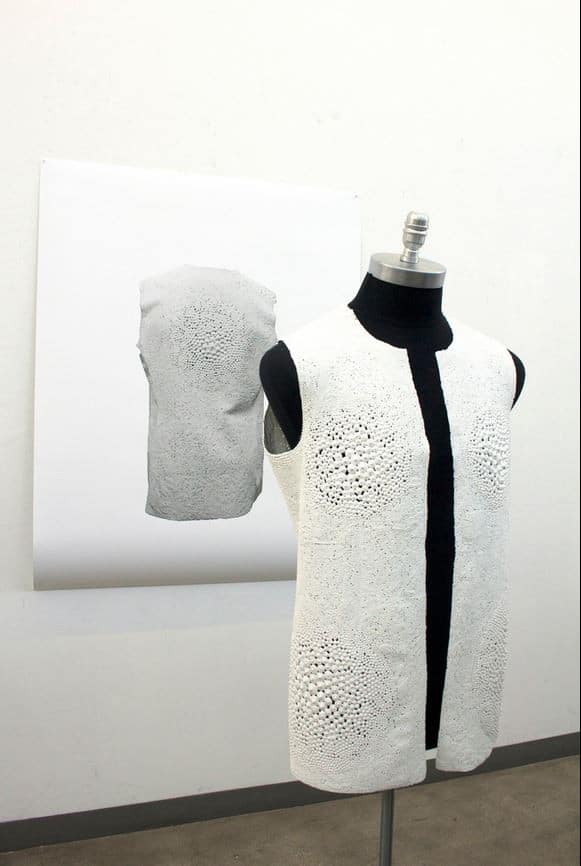 Jacket Made From Acrylic Paint 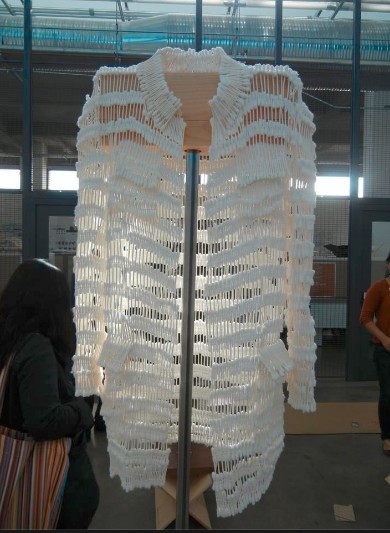 Jacket Made From Q Tips 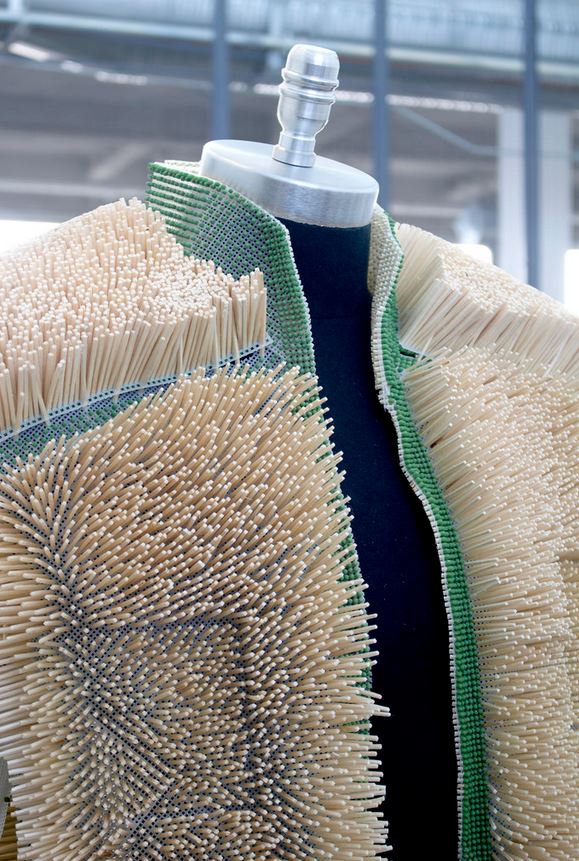 Jacket Made From Match Sticks 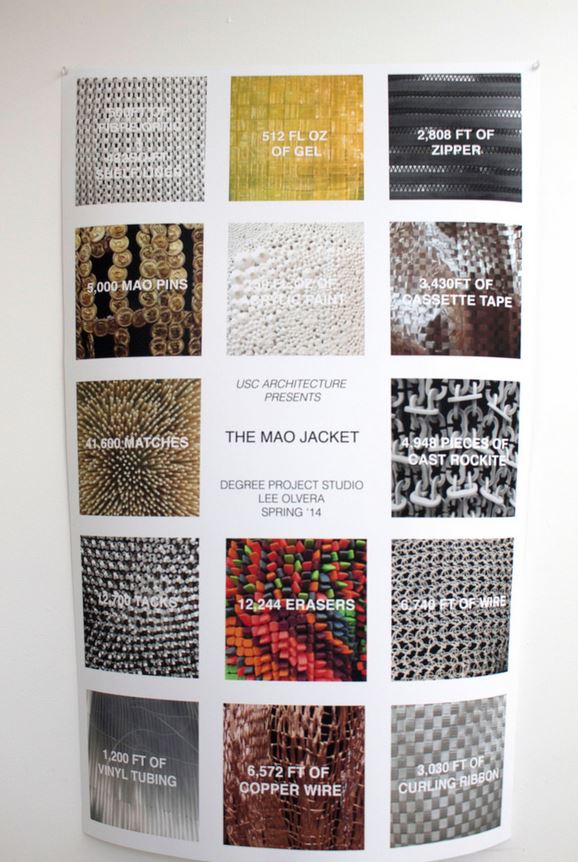